I love to read almost as much as I love flowers.

I have a list a mile long of books I love and ones I want to read before I kick the bucket.  Yes, a Book Bucket List!

As to authors, I have my favorites living and dead.  So I pondered the fact that “What if I was able to bring flowers to my favorite author? What would I bring?”

Lisa Luck and Shannon Cosgrove Rivas chose Jane Austen, and they would give a large bouquet with an array of David Austin garden or Evelyn roses with fabulous fragrance and romantic ribbons. Shannon added, “or maybe I would bring her some crazy tropicals just to see her reaction!”

Christopher Grigas delved into the Horticultural history of flora studies and chose Carl Linnaeus, the father of Taxonomy and Plant Identification. Christopher said,  “I am mesmerized by the way that plants have been Identified and organized for nearly 250 years. Linnaeus was very fond of a unique little woodland flower named after him called Linnaea borealis or Twin flower.   I would bring him a bundle of them tied with twine and thank him for his work.  I am a botany lover and hope to keep his legacy and passion alive.”

Tracy Parks loves the weird and wonderful writings of Stephen King and would send him a botanical display of Corpse Flowers, and I would hope a can of Febreze.

Little did I know that I would soon be living this scenario…What is the saying, “Be careful what you wish for”?  Sometimes things just fall in front of you and opportunity knocks.  It knocked twice for me in one week!

My favorite Author is Anne Rice…

Anne’s Life has been as interesting as her books, and I have admired her for her personal courage, artistry and openness.  Anne has written over 30 fascinating books.  Her Vampire Chronicles including Interview with the Vampire and Queen of The Damned have been made into popular movies with stars such as Brad Pitt and Tom Cruise.  Her books include some of my favorites, Tale of the Body Thief, The Mayfair Witches, Cry To Heaven, Pandora and her most recent books on the life of Christ.  All have that dynamic styling and storytelling power that makes you feel as though you were in the room with the characters as they tell their tales.

Her most recent book is Angel Time, Songs of the Seraphim, with a new unlikely hero, a hitman named Toby O’Dare who is visited by an angel and offered redemption if he will do as asked and work for the good of man.  It is classic Anne Rice.  Some critics said that her return to her faith would dull her writing, but after reading her latest novel, I am convinced that her colorful, compassionate and thought provoking story will become another classic.  A second book that delves a bit deeper into Toby’s personality will hit the shelves next November.

I was thrilled to see that she would be having a book signing at the famous Vroman’s Bookstore in Pasadena.  Meeting Anne would be a side note on my book bucket list.  So I set about to seek more information on Anne’s flower personality before the book signing.  How could I not bring her flowers!?

Scouring around my online haunts, I found myself in the amazing position to actually ask Anne about her books and flowers.  She has a great Facebook presence, so I sent an e-mail.

Suzanne: If you could imagine a few of your favorite Characters walking into a flower market what would they carry away with them?
(Anne was gracious and sent a personal e-mail reply to me.  To say I was giddy with excitement would be an understatement.  Her answer sent me to my bookshelves to reread passages from her novels and allowed me to see her descriptive words come alive once more.)

Anne: I have written so much about so many flowers I don’t know where to start.  I hope this may answer…My Characters love the flowers of New Orleans, especially purple Lantana, the fierce Rose of Montana vine (also called choral wreath or Queen’s wreath)… and they reflect on giant oleanders and bridal wreath…and a multitude of other flowers.  Claudia, in Interview With The Vampire loves Chrysanthemums.  Lestat loves the huge flower arrangements in luxury hotels, and comments on them in Tale of The Body Thief.  Stella, in The Witching Hour, loves white lilies and requests at her funeral that there be only white flowers.

I was struck by the many floral references in her books her descriptions, the displays of flowers, the scent, the texture and some unforgettable scenes set in gardens.  The simple crushed petals of the beautiful child vampire spilling over her gown, would leave you with chills.

So what did I bring to my Favorite Author?

I chose to design a textured Gothic Cherub vase with Green Hydrangea, Amnesia roses, Crystal Blush Calla Lily accented with Pussy willow and monkey tails .  The addition of scented organic garden herbs, Rosemary and Lavender with trailing pink Jasmine vine gave it fragrance and the touch of romance and mystery that I felt in her books.

I delivered the flowers to the book signing and they were placed on her signing table which added a touch of color on that rainy day.  I was honored to have them in her presence.

When It came time for me to have my book signed, I asked her how she liked the floral design and she was delighted.  She Thought the Amnesia roses were so unusual in color and they felt mysterious.  Just the mood I wanted!  This was a personal memory I will cherish forever.

So who else came knocking on the literary door?

Would you believe Ozzy Osbourne, yes the Prince of Darkness, the Crazy Train engineer himself…
Ozzy just released his autobiography I Am Ozzy, and it has jumped to the #2 spot on the Times NY Best Seller list.  In all fairness, it is a fun read.  I am surprised that he is still standing after the exploits in his book.  As someone who hung out with the LA rockers in her youth, it brought up some vivid memories. Well, at least the ones I can remember, LOL!

Our local Barnes & Noble is a five minute drive from the studio, so with my sons egging me on, we decided to attend what they were calling, “the book signing event of the year” in town.  It was a massive throng of humanity, 2000 fans at least.  I really didn’t think that we would get in since our wristbands were in the second half of the alphabet, but I knew from working events to wander near the press guys since they get extra passes.

About an hour into the wait with feet aching (why did I where heeled boots?), I sat on the window ledge of the bookstore and joked with the press guys and one of them came out the front door looked over and said, “would you like this wrist band?”  I looked and it had the letter that had just been called!!  “SURE!”  I strapped it on my wrist, called the kids on the cell phone and we met inside and up the stairs to the signing space.  We had to wait another hour inside, but we did get to have our books signed.

Ozzy’s handlers were rushing the crowd through, and I hoped I’d get a moment to ask a question or get a photo.  I guess at times age has its privilege, so I asked politely if I could ask one question.  Ozzy said, “Sure!”

I think Ozzy was a bit surprised.  I asked him…What is your favorite flower?  I was expecting some dark gothic rose or hemlock… He looked up from signing my book sort of grinned and said, “Gardenias”!

I was delighted…so much for the Prince of Darkness!  Anyone who loves flowers can’t be all that bad! 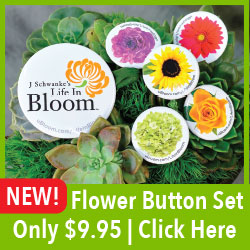