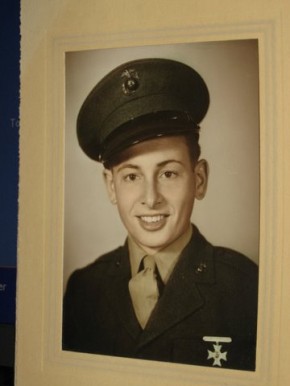 In Honor of Veterans Day 11-11-11… Marine, World War II Veteran,&  Florist : MEL SCHWANKE is Guest Blogging… My Dad’s recounts his experience as a Marine in World War II… It is not for the faint of heart…

It is a good thing I was born on a Farm Near Leigh Nebraska. It was during the depression and times were tough. So I grew up tough. I milked 8 cows every morning before I walked to school and again at night after I walked home from school about 2 miles each way.

One day as I was herding a mama cow into the barn I got between her and her calf and the mom took me on. She had big horns and she tossed me, goring me pretty badly. My Dad lost the farm because of my long hospital stay and recovery. 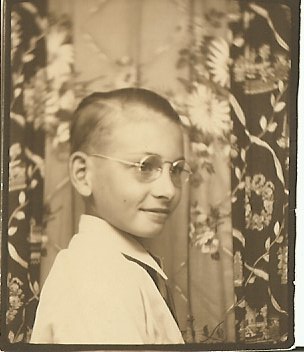 Mel Schwanke as a Young Boy in Leigh Nebraska!

So we moved to Fremont and I worked for the Plumfield Nursery until I was old enough to work for the railroad. I delivered the Fremont Morning Guide (the Local Paper)  every morning to every one south of the tracks, in Fremont. I did this on foot until I earned enough to buy a bicycle.

About the Time I turned 17 the Japanese Bombed Pearl Harbor… I was 17 and had enough credits to leave High School mid term and not wait for graduation. I enlisted in the United States Marines. My mom had to sign for me as my dad would not. He wanted me to go to the Army as he Did in World War 1.

Mel Growing up on the Farm in Nebraska

I took my training at Marine Corp Base at Camp Pendleton in San Diego California. Now  this was World War ll And it was a far different type of War than we see today. Oh there a lot of things about War that will never change but luckily some things have.

When we, as marines, took training we didn’t crawl around under barb wire with blank bullets overhead, back then they used real bullets because we had to learn quick (and well)  how to duck and survive. I was assigned a brownie automatic rifle (BAR) and how to use it. I was lucky to have a fellow Fremont friend in training with me Johnnie Stout. We went through Basic training together and one day we lined up and counted off…. 1-2 1-2 1-2 John was a one and I was a two. John went to Iwo Jima and I went to Pelilu and then to Okinawa. Johnnie did not come back.

We sailed to Okinawa on a very crowded troop ship, it was hot, and smelly as many of the troops were sea sick by the time we crossed the equator and got near Okinawa. We had all our gear including the food we were to eat. When that ran out we would catch an occasional pig, or chicken and cook it in our helmet.

Okinawa was the closest island to Japan (and the Japanese knew it)… the US would need a close base to refuel planes and plan an attack on Tokyo. The Japanese had occupied the island for years and were entrenched in caves all over the island. They could see us coming and started shooting at our boats bringing the men to shore.

We were loaded down with guns and ammunition and boots and helmets and gear. Our Naval escort announced he was not going any closer to shore so he let down the ramp about 100 yards off shore…  and it was up to us to march right into the water, sink to the bottom and then walk in underwater and march up onto the beach.

We lost a lot of men just on the beach that day. We needed to find some sort of shelter and stop and clean our rifles and not get shot doing it. We dug a lot of fox holes, we watched out for each other. I arrived on Okinawa on Easter Sunday 1944, and we spent all of April, May, and June fighting almost every day making our way clear across the island. We lost even more men as the days and weeks past. 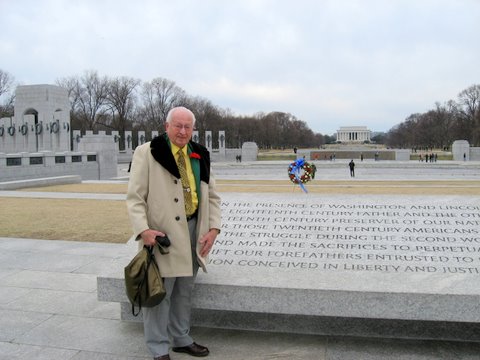 I am sure many of you saw the Movie Forest Gump or perhaps Saving Private Ryan, they did a good job of picturing what it was like, how you tried to save your buddies. ( I couldn’t stand to go to those movies… because  it brought back too many memories, but I have since watched them on TV. It’s Still very difficult to watch).

Back then… many of our boys (fallen soldiers)  didn’t get nice funerals back here in the states, unfortunately sometimes, all we could do was to push them aside, take their rifles and ammunition and leave them there. That was extremely difficult and heartbreaking… but this was War. 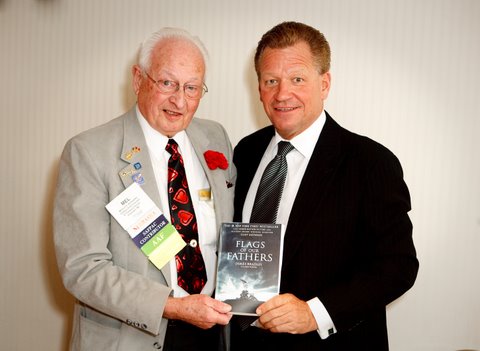 When I had free time in the service I would work with Graves Registration. I had worked briefly at a funeral home in Fremont while in High School so I knew a little something about embalming and such. and we would use some embalming fluid when possible…  so I would pick up a body, take off his name tags, put him in a body bag and fasten his dog tag to the end. Then these bodies would be trucked away provided there was time and slow firing took place. It wasn’t pretty… it was War!

On June 10th when we were on the last ridge of the island there were only 5 members of my original platoon of 60 still alive, me included. We had received reinforcements but our original guys were mostly gone. I believe we lost about 40,000 men in the South Pacific at that time. 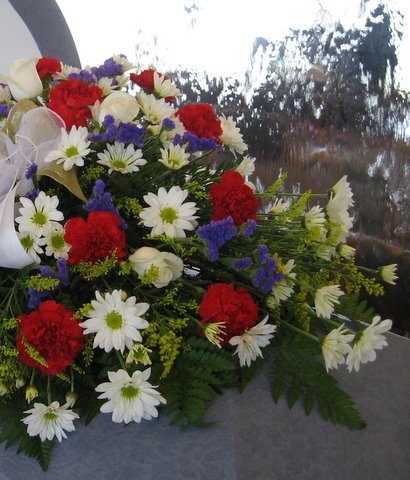 On that June day, we had some Japanese trapped in a cave under us and we were lobbing hand grenades down at them and they were throwing hand grenades up at us. Sometimes we would catch them and throw them back down at them and they would explode almost immediately. I was using a walkie-talkie held up to my ear and calling for a tank to come around the front and hit the cave with full fire. Suddenly one of my friends hollered.. “Mel…By you feet, look out”.. I reached for the grenade that had been tossed at my feet…  and it went off… I got hit in the face, arm, and legs.. My buddy who carried me off the hill said I looked like his mom’s sieve (strainer) at raspberry time.

They took me to a medical tent somewhat like a M*A*S*H* unit. They used strong magnets to try to get the metal out of my one eye and my face. I guess that measure did more damage, but it was the best solution at the time. I lost most of the sight and the power to move that eye, and it didn’t do much for my hearing either.

My watch was gone and I have a scar there to this day… I have shrapnel all over my body and I frequently set off Airport security.  Some of the shrapnel is lodged too close to my spine to remove. I was flown to Ai eia Heights Hospital in Hawaii and then to Guam to a hospital and finally to back to San Diego.

I spent 13 months in the hospital and when I was dismissed I was told, “ Get used to that wheel chair son, you will need it full time by the time you are 50.” So far I have left it (that wheelchair) behind over 65 years.

The hospitals were a lot like you see on the movie M*A*S*H*. All of the guys were lined up on cots and with all kinds of injuries. I was delighted one day when they rolled me into the bath house to see a friend who had been shot in the head. The bullet went in one side of his head and out the other. He had a severe balance problem and when we got well enough to go for walks he would suddenly head off in one direction or another. I couldn’t stop him so I would have to go and get him. 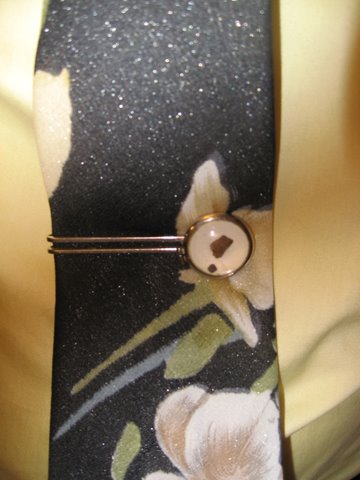 Pieces of shrapnel Mel's wife Joey removed from his leg.

My parents came to visit me in the hospital. My dad was OK by then that I was a marine. They hoped I would get out right away and come back home…  but I was too proud, after all…  I am a Marine!  I turned down a medical discharge and returned to active duty state side for the rest of my commitment. 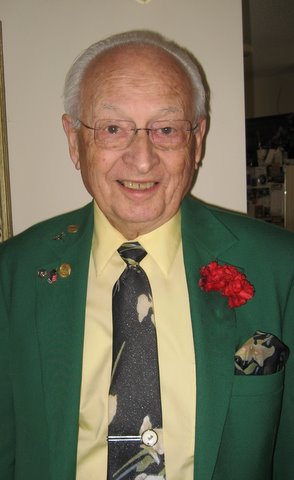 Mel continues to wear the Shrapnel Tie Bar everyday as reminder of his Service!

That is what it was like… for me and thousands of other Great Men… that served our country during WWII.  We did it because we LOVE our Country, as well as our Freedom! We did it for everyone, our Mothers, Fathers, Sisters, Brothers, and Children!  We served and we Fought for the Freedom we enjoy as a country today! 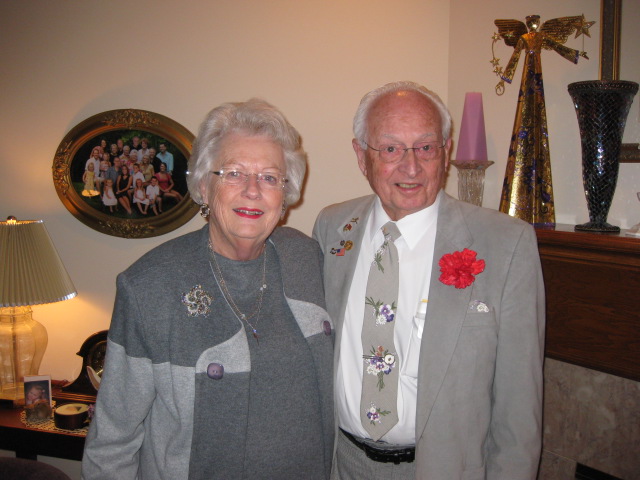 On this Very Special Veteran’s Day 11-11-11. I’m Thankful that I am a Marine and that I live the Greatest Country in the World. America is the Land of the Free and Home of the Brave!  May God Bless You Today…  the same way He continues to Bless our Great Country, Myself and My Family! 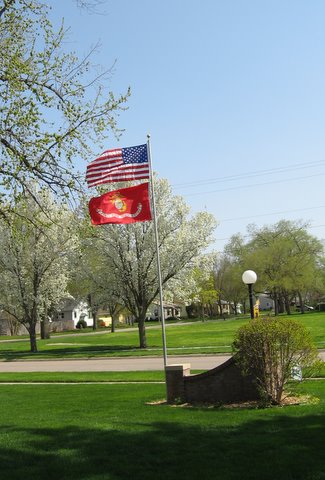 The American Flag and Marine Corps Fly Proudly at Mel's Home Each and Every Day! 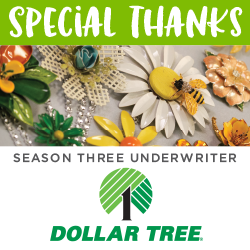