Are you aware that 17.4 Trillion Dollars of disposable income every year is controlled by the “TWEEN” demographic? Better still do you know what a “TWEEN” is? Thought so!

Well “TWEENS” are the newest buzz word for kids ranging in age from 9-19 depending on who you talk to. The most important thing to know about “tweens” (kids) is that they have money to spend. Sometimes it is not their own actual money but rather money they get influence their parents to spend on or for them.

These kids are different…to say the least. The best way to experience the “Tween” phenomenon is to go to the mall and watch them shop. Or better yet, go into stores that cater to them, for example Claires. If you are not familiar with Claires…well you gotta go! It is pretty much impossible to enter Claires with a “Tween” and not exit without spending around $50. And you will get the cutest little tiny bag to carry your stuff in too!Glitter Lip Gloss, Metallic Nail Polish, Earrings, Puff balls, feather rings, buttons, stuff…you know, the stuff Tweens crave! They love this stuff…if it sparkles or glitters or is shiny or funky colored they go crazy!

Recently I the John Henry Company introduced a new Prom/Homecoming Flower book to the floral industry. I worked on the two book set as floral creative director. This meant that I had to do research on Prom and Homecoming Flowers and what kids were doing for Prom and how they were spending money and what was trendy and fashionable.

I was shocked. John Henry uses a great tag line in their promotion of the product: These are not your mother’s Prom flowers! No kidding! These are not my PROM flowers or my sisters…these kids (TWEENS) do stuff a lot differently that I did as a kid. I remember my Powder Blue, wide satin shiny lapels and Powder blue and navy ruffled shirt…with my carnation boutoneirre centered with a sweetheart rose. My date carried a nosegay and had a Holly Hobby dress and blue powder eye shadow and HUGE plastic rimmed glasses. We were stylin’ (for the times) and I had a Davy Jones AKA Monkees Hair cut! Yikes.

Today’s average prom dress cost on average $250-500 according to the New York Times. The average couple will spend on average $1200-1800 on Prom night. Dinner will average $100…and get this…flowers clock in at 18.00. That’s embarrassing. I know it makes my face red.

What is so very interesting to me is all the fashion accessories that are available to today’s prom attendees. There’s jewelry, limos, elegant dining, photography, DVD’s, plane rides, (YES PLANE Rides…Prom dates in Omaha Nebraska are flying to Kansas City Missouri for dinner before Prom)…Boas, Tiarras, Sunglasses (Oakley sunglasses at $179 bucks a pop)…don’t even get me started on shoes and purses.

Now here’s where it gets me…Florists are selling these kids, $7 dollar bouts and $19.95 corsages. Imagine…these TWEEN’s are heading out for the most memorable night of their high school careers with $500 dresses, in Limos, for Elegant Dinners with Dates in Tuxedos and as an industry we are letting the parade pass us by!

Marketing to this specific demographic is completely different than what we are used to. We have to become cool…we have to become hip…we have to get CRUNK with our Prom flowers to wear. (by the way CRUNK is a combination of Crap and Junk that turns into the word CRUNK…but it means HOT! Go figure!)

To shoot the John Henry Prom/Homecoming Book we had to hire models. Kids that were prom age…that modeled professionally. They were from all over the country, LA, Pheonix, New York, Dallas…they were cool kids and a lot of fun to be around. They were models that know “COOL” but at the same time they were kids…from 14-18 years old…still kids! Their favorite product in the Prom Book across the board was the BLUE DYED ROSES with the GLITTER Edges. I know that is gonna freak out a lot of you…but at the same time it s a very very very (3 verys) good lesson for us all to learn.

Kids like the opposite thing that their parents like. It’s just the way kids are and they want to stand out among their piers. They have groups they run in and they all want to be the coolest! That has never changed. For us to successfully market to this demographic we have to enlist their help and study their habits and behavior. We can no longer impose on them our likes and dislikes…for they are acquiring their own tastes, style and fashion. We must learn how they perceive flowers and how they want to buy them.

My Friend (and one of the most brilliant marketers) has a store in a small Midwestern town. She has developed over the years a marketing tool called the PROM open house. It is styled and designed to appeal to the youth market. She employs students to host the event…(no adults are allowed to attend the open house) How’s that for starters. She serves complimentary Soda and Pizza, and plays the current music at full blast. Hey it’s a party for kids…to get them interested you have to let them have it their way! Then she makes up samples many new trendy CRUNK design work in FRESH flowers (not SILK, sorry she thinks the Kids just can’t make the transition) so they can see what their selections will look like EXACTLY on Prom Night! They are ordering from their piers…(other TWEENS) so it becomes a bit competitive…but what the heck…this a competition for a percentage of the $1200.00 per couple.

She holds the open house from 5-10pm so the kids have time after school or after events or after work…to order their flowers. Her ad in the school paper offers in HUGE PRINT…free soda and pizza! (in smaller type “and order or Prom Flowers Too!”)They pick out rhinestones, and decorative wire and ribbon to put in their special flowers to wear. Girl pick out flowers garters for guys to wear on their arms and guys get floral bracelets for their dates. It’s high energy, high ticket fashion design with flowers. It’s the biggest little party for these Kids and no one misses the event! It has become a “MUST” to attend. Her average corsage price $65.00…average bout $29.95! Now that’s marketing!

I have a lot of florists tell me they won’t order the blue roses or the glitter roses…because it “just isn’t right”. They don’t like it…many of them wouldn’t buy a $500 prom dress either…it’s too bad…because they’re not going to prom… or to the bank for that matter. (with PROM Revenue) Last year Conde Nast reported that 17.4 BILLION Dollars was spent by the TWEEN Category on Prom and Prom Related items. What do you remember most about prom?

Me too…In fact I still have that Carnation Bout centered with a sweetheart rose dried up in a box somewhere. It smelled nice…and made me feel really special when it was pinned on my broad satin blue lapel. We always remember the flowers. It’s all about the flowers! Let’s ALL start thinking that way and get rich together! 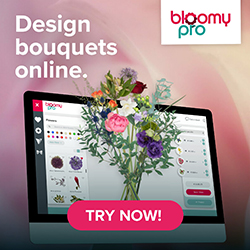